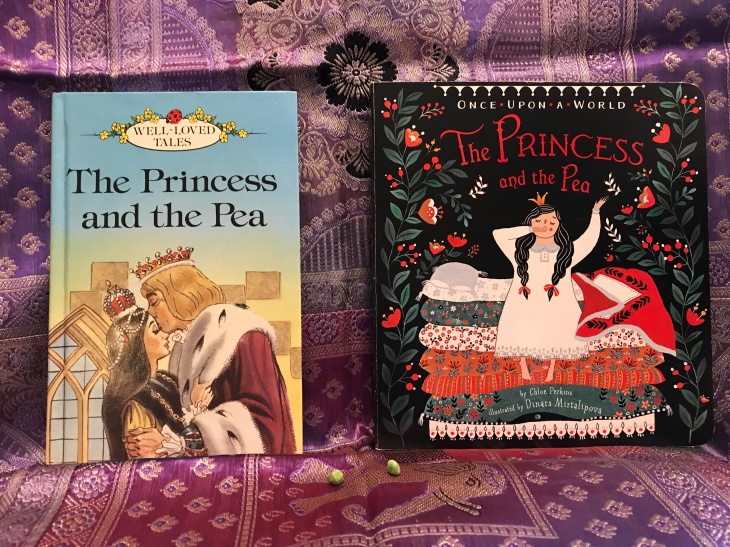 A couple of years ago my parents gave me a file box full of my old childhood storybooks that I had chosen to keep when we moved house twenty years ago. Some of my choices were perplexing. I kept two story books about the nativity, which is odd since I don’t come from a religious family. There were a few books that I just plain forgot about. And there were books I absolutely loved and I’m so happy my parents saved them.

One of those books was my favourite adaptation of The Princess and the Pea. I loved the artwork (even if the prince had the same hairdo as He-Man). The princesses all had a particularly Tudor style of dress. I also loved the story.

My daughter recently turned three years old and I went through that file box to find some age appropriate books for her. I found The Princess and the Pea and was so excited I read it to her almost immediately. I loved this book so much growing up, I thought she would too.

What constitutes a real princess from your average run of the mill princess?

First, what constitutes a real princess from your average run of the mill princess? No criteria were ever provided to understand the distinction. Second, “there was always something the matter with them.” What an awful message for children. Change yourself according to someone else’s desires, or prepare to be discarded. So the princesses were all defective because they didn’t conform to some unknown criteria. This prince was starting to look like a real jerk.

My daughter seemed interested in the story, so I started changing some of the wording so the message was a little better. Then the title princess came in from the rain to the prince’s castle and all she said was “I am a real princess.” And wouldn’t you know it, that was enough for the prince. I can only assume that the princess was really hot, as the prince only just met her and they didn’t seem to have a conversation. Spoiler alert, she passed the pea and mattress test.

My husband was in the other room as I read this book to our daughter. Once I finished, I just started laughing. My husband piped up and said “You’re not going to read that to her again, right?” How could I read my daughter something with such a disempowering message? I was disappointed to say the least. I love this fairy tale. Was there a way to tell it that gave the princesses some agency and to make the prince not seem like such a dirt bag?

These thoughts were swirling around my head, when my brother-in-law gave my daughter a book from the series Once Upon A World. This series takes classic fairy tales re-told by Chloe Perkins and has illustrators from around the world showcase different cultures through the artwork. My daughter loves this series and so do I. It just so happened that one of the books from this series is The Princess and the Pea. I read it in the bookstore and I became excited about this story again.

This retelling of The Princess and the Pea is wonderful. First, it’s the king and queen who insist on the prince marrying a princess. Also, the princesses are not simply judged on their physical qualities, but by their accomplishments, whether it’s being intelligent, a good musician, or an artist.  When the title princess does show up, she has agency. She is a traveller and explorer. The prince and the princess feel “the spark of true love”[2] after talking about what they have in common. Spoiler alert, this princess also passes the pea and mattress test. I love this book and, more importantly, my daughter does too.

I wasn’t scarred by my old edition of The Princess and the Pea, I turned out okay. If that was the only version of the story my daughter read, she’d be okay too. However, I want to expose my daughter to the most empowering messages that I can. There are some who think that the messages in fairy tales are misogynistic and antiquated. That doesn’t need to be true. I think the way in which we tell these stories can shape the messages in the narratives and spark imagination. There is a reason why they’re classics, sometimes we just need to update the way we tell them.

Have you ever been surprised when revisiting an old classic? Are there any updated fables you love? Tell us about it by posting on our Facebook page or contact us on Twitter @mosaic_times.